Watch Lionel Messi SLAP in the face by Argentinian star Rodrigo De Paul during training as he asks ‘are you stupid?’

A video has gone viral of De Paul messing around with Messi during a session in Miami.

The clip shows Messi saying something to De Paul, which caused a playful blow from the midfielder.

Both players grinned after the incident, while Leo’s former PSG teammate Leandro Paredes also grinned as he led De Paul away.

According to Mundo Deportivo, De Paul said with his mouth: “Are you stupid, Leo?”

The Atletico Madrid star is wearing a bleached blonde barnet in the United States, where Argentina is based this week. 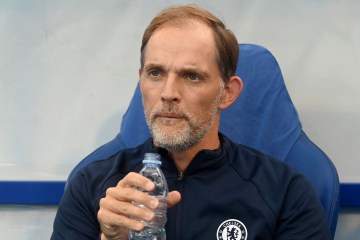 De Paul and Messi go way back, with the Atleti ace earning his first international cap in 2018.

In 2021, the duo won the Copa America together, Messi’s first international trophy.

Argentina will take on Honduras tonight at the Hard Rock Stadium in Miami.

They will then face Jamaica in their penultimate game before the World Cup in Qatar on Tuesday evening.

HOW TO GET FREE BETS ON FOOTBALL

Argentina will begin their Group C attempts against Saudi Arabia on November 22.

They will then face Mexico and Poland in their other group matches.